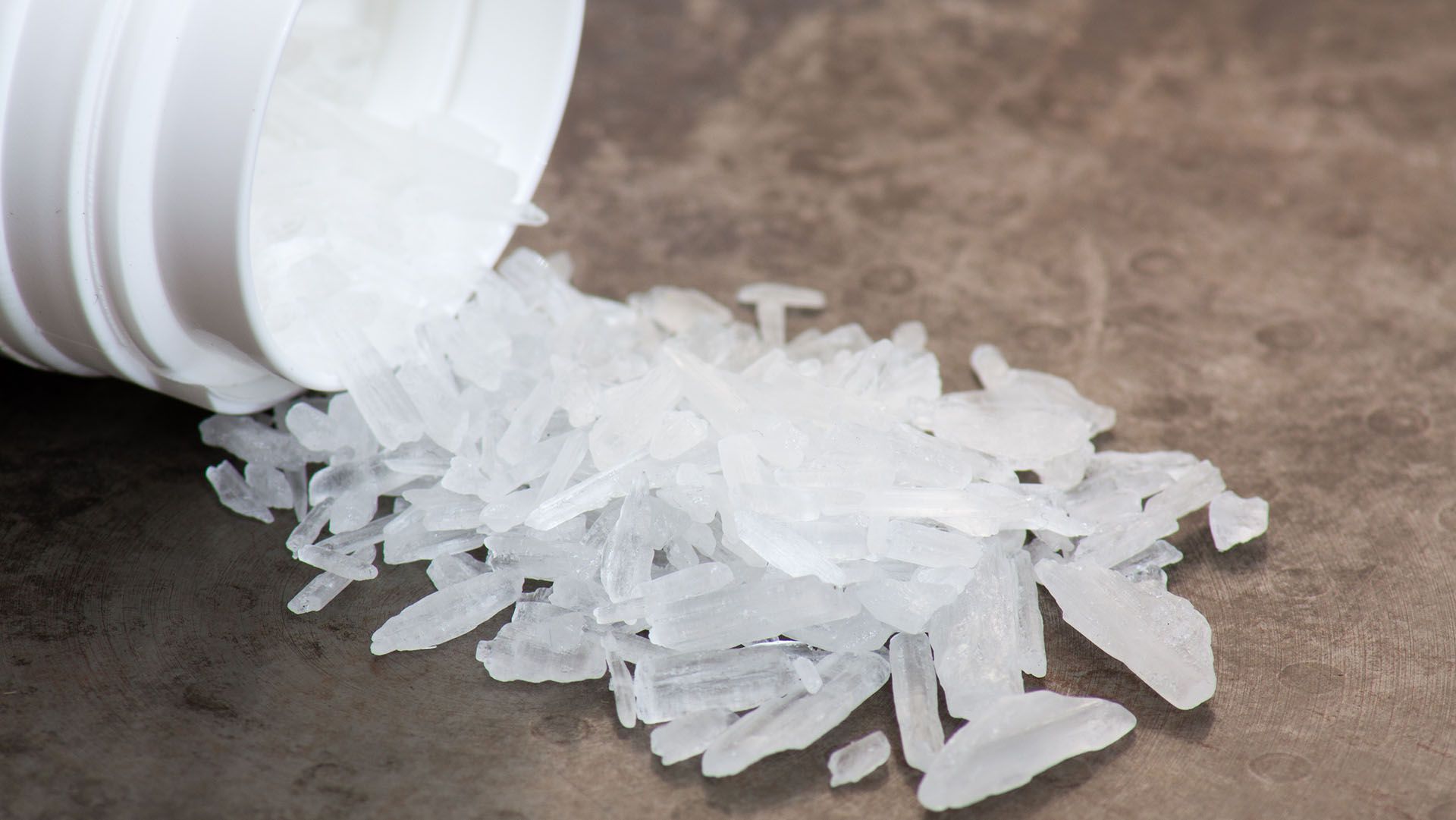 Amphetamine addiction is dangerous, can lead to serious health consequences and increases violent behaviour, yet its origins didn’t begin on the street.

Amphetamine was not discovered as a cure for any ailment. Instead, it was a failed attempt that was mass marketed for its ‘feel good’ properties with dire consequences.

The History of Amphetamines

Amphetamines hit the market in the 1930s as a solution to nasal congestion. Gordon Alles, a Los Angeles chemist, was attempting to create a drug to compete with the successful ephedrine, which was asthma, cold and allergy medicine.

Alles created a compound he called beta-phenyl-isopropylamine. During this time, it was common for scientists to test their new compounds on themselves. It was considered to take a moral stance on their discoveries. Yet what Alles didn’t realize was that he had discovered the world’s first psychoactive drug.

After getting what would later become five times the recommended dose injected into his body by a doctor, Alles discovered that his nasal congestion had completely vanished. He also found himself feeling chatty and euphoric but unable to sleep. He also experienced heart palpitations and high blood pressure. He recalled his mind racing from one subject to the next.

Alles began testing his new compound on those around him. Asthma sufferers reported feelings of euphoria but little impact on their asthma symptoms. Alles decided to try and market the drug for its euphoric effects.

It was named Bezendrine and was available as an over-the-counter inhaler available at the local pharmacy.

The inhaler was marketed as a solution to ‘psychological tiredness’. It became a popular aid to pilots and soldiers during World War II.

Overprescribed to the Masses

A similar drug in pill form Benzedrine Sulfate was marketed for mild depression. It became the answer for many people’s ailments and was soon overprescribed. In 1938, sales jumped from $95,000 to $175,000.

It wasn’t until the 1970’s that new laws came into effect to limit the medical use of amphetamines. This was because it was determined that the medical value of these drugs was compromised by their dangerous effects and high likelihood of abuse potential.

These drugs have been classified as Schedule II drugs by the Drug Enforcement Agency (DEA). This means that they have medical value, but are highly controlled due to their potential for abuse.

In 1965 amphetamines were restricted to prescription use only. Despite this, 30 percent of college students surveyed reported using amphetamines illegally in 1971.

Amphetamines are a class of stimulant drugs that include amphetamine, methamphetamine, dextroamphetamine, ephedrine, and others. Stimulants are also referred to as ‘uppers’.

This classification of drug is designed to increase energy, wakefulness and concentration. In the short term, it is believed that stimulant drugs will give the user a shot of adrenaline and euphoria. This can be incredibly addictive and has a high potential for abuse.

The appearance of amphetamines will vary. They can be in powder form, tablets, capsules or crystals.  Amphetamines are often smoked, swallowed, injected or snorted.

One type of amphetamine, popularized by the tv show ‘Breaking Bad’ is Crystal methamphetamine.

Commonly known as ‘crystal meth’ or simply ‘meth’, this form of the drug looks like glass fragments or shiny bluish rocks. Methamphetamine is also called blue, crystal, ice and speed.

Amphetamine powder can vary in colour and may appear white or brown. Often there are traces of pink or grey. Amphetamines are often associated with a bitter taste and a strong, sometimes fishy odour.

When amphetamines are made illegally they can vary greatly in appearance and size because they are not adhering to any standard. They can be made with a variety of binding ingredients and psychoactive substances may be added.

How Do Amphetamines Affect the Body?

Amphetamines act as a stimulant for the central nervous system (CNS). Your CNS includes your brain and your spinal cord. It is the central hub of the body as it serves as the major relay station for the body and its actions, maintenance and regulation of nearly every single bodily function.

Amphetamine works by activating receptors in the brain and increasing the activity of a number of neurotransmitters, especially norepinephrine and dopamine.

Methamphetamine’s effects are often short-lived. With the stimulation of the reward center of the brain, users will often want to repeat the experience. This can result in users bingeing the drug over and over for days.

The way amphetamines will affect the body short-term will vary depending on:

While the exact experience with amphetamines will vary from person to person, those who use amphetamines have reported experiencing feeling:

While under the influence of amphetamines you may experience large pupils, dry mouth, teeth grinding and an increased sex drive.

Large Doses May Cause:

When used as directed by children with diagnosed ADHD, amphetamines and related drugs have a calming effect. There are no amounts of amphetamines that are considered safe to take. Even amphetamines available by prescription still have potential side effects.

Long-term use of amphetamines is linked with changes in the brain structure. These changes can also be seen in infants when their mothers used amphetamines during their pregnancy.

Methamphetamine use has been linked to an increase in damage and death to cells in many different areas of the brain, particularly the prefrontal cortex, which controls functions such as attention, abstract thinking, planning and judgement.

Long-term use of methamphetamines can also increase the intensity with which HIV/AIDS affects the body. One study has demonstrated that those who use methamphetamine have more cognitive problems and injury to nerve cells than those who have HIV but do not use the drug.

Long-term methamphetamine use has many other negative consequences, including:

Signs of an Amphetamine Overdose

As with most drugs, taking amphetamines can put you at risk for an overdose. With illegally produced drugs, you have no way of knowing what is in the product and the possible effects taking that drug could have on your body.  In fact, the original inventor of the compound inadvertently took five times the recommended amount the first time he tested his creation.

If you notice the signs of overdose in yourself or another person who has taken any drugs it is important to immediately dial 911.

Signs of an Overdose Can Include:

How to Get Help

Seeking help with addiction is not a sign of weakness. Instead, it is a sign of strength. Many of the long-term effects of amphetamine use can be reversed once you are able to overcome your addiction and start a sober life.

By seeking out help you can find programs to help you overcome your addiction, support groups to hold you accountable and even medical interventions to supervise your recovery and assist with physical symptoms.

Why is it so Hard to Quit Cold Turkey?

Seeking out help for amphetamine addiction is important When you ingest drugs into your system, you begin altering the way that your brain is functioning. Amphetamines affect your brain by: overstimulating the brain’s reward circuit’ and overflooding the brain with excess chemicals.

Do I Need to Detox?

Many who try to seek sobriety from their addictions turn to friends and family for support. While it may seem like a safe option, it is not always the best choice.

While friends and family may provide a level of comfort, they do not always have medical training. Withdrawing from drugs can come with physical symptoms that can be frightening and even dangerous.

Amphetamine Withdrawal Symptoms can include:

In addition to physical symptoms, your body will also be craving the drug. Some individuals may seek a detox program where their symptoms can be medically monitored and where they can easily transition into a rehabilitation program.

Some studies have been looking at potential treatments to help break the cycle of addiction to amphetamines. There is some evidence that cannabinoids may be beneficial to help ease the physical symptoms of withdrawal. However, this method is often criticized as trading one addiction for another.

If you or someone you love is struggling with addiction, it is never too late to seek help and support. Every step towards treatment is one step closer to a sober life.